On saturday I went back to the site with Jens Thiis, and seeing it again, arriving from a different direction and up the hill side really gave me a new perspective on how movement around the grounds should be facilitated. Just walking along the lines of the sketch I made the day after the pin-up showed me that there was something about it, but that it was arbitrary.

I needed to find some details in the castle – little things you would never normally notice – and then let those be my areas of interest. Walking around the grounds people would themselves immediatly see the bigger things – those that don’t need pinpointing, and they could easily diverge from the path, to then return back to it.

I was encouraged to look at the plans of Miralles and the like. To see how they graphically represent movement, how the sections are made on lines that come directly from the plan, set askew at an angle responding to its place within the movement on the site.

I started working on tracing paper on top of a 1:200 plan of the site. I would have wanted a 1:100, but the size of it simply made it unfeasable. The castle grounds would only just fit inside an A0 – and I really wanted to work with the movement through the nearby landscape as well.

Gradually it occured to me that the tower could work as a hinge. The two gates were originally intended to make entry harder, and in a diagonal line. This line of movement still exists and could be continued. So using the corners of the tower closest to the interventions I used these radial lines to connect the different parts of the site. From arriving at the grounds in this new way I really want to incorporate walking under the bridge and up the hill into my project. The framed view under the bridge, the obscured views of the castle and the sea you get while walking up, looking past the trees, and then finally the look along all the walls to the tower. This grand perspective in each direction – the view over the sea and the landscape of the bay and the view towards the tower – this would be my viewing platform!

Then came the connection down to the level below the bridge. here I felt that any intervention would need to be in the language of the hinge. Starting the sense of moving in diagonals already here. This has so far resulted in a 30 m walkway up the hillside to the viewing platform – extending 18 m from the side of the hill. On the one hand its a very drastic thing to do – on the other I feel that it will greatly enhance the qualities I already mentioned. It’s an important part of the program and maybe it should be treated as such? I expect to be challenged on it, but it works well in plan.

How to end the loop was another great problem for me. I wanted the walkway to take you around the ruins in a way that is natural and which you could leave and rejoin and you please. For this to really work, I wanted to play on the two different entrances to the site. Either via the bridge as usual, or under the bridge and up the hillside. These two entrances should take you in the two different directions around the site. So you arrive on one and leave on the other. Getting the full experience of the route. This caused me a lot of irritation, because the two will pass right next to each other, and I don’t intend to put up signs saying “go this way”. So Arriving there will be two funneling mouths you can enter. One pointing towards the bridge, one towards the hillside entrance. You can of course choose yourself, but you will come back on the opposite one and point towards the other exit. This is accomplished by letting a walkway cross above the stair going 4 m down to the excavation of the tower. I feel that this will also add another layer to the exhibition space between the tower and the neighboring building. You can see people walking up there and as you walk up there you can see the tower and the exhibition from a different perspective. Either a telling of what’s to come at the end of your walk around the site or a reminder of where you started. 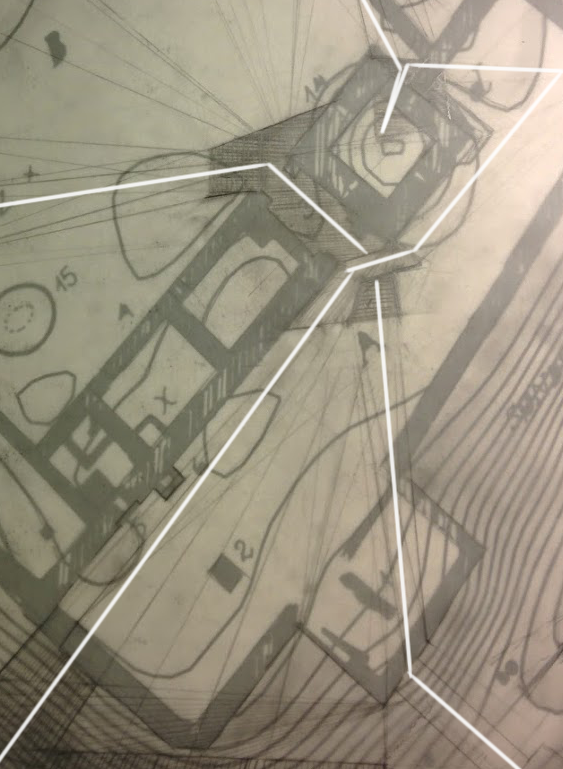 My next planned step is to start on a new layer of tracing paper, using marker to clearly draw up the walls and re-draw the guide lines I ended up using. Letting the others fade to back on the layer below. I’m still debating how to draw the sections and whether I need close up details here or if it should be solved in plan. There is also the issue of how to draw the paths between the excavations. I think of them as being made of crushed brick gravel, which then either abruptly or gradually regenerates into bricks sat the interventions, thusly making a connection. This also begs the question – what about the walkway? is that also made of massive bricks? and if so isn’t it a waste to not program the inside of it?

I definitely feel that I am on the right course, but the fact that this week’s pin-up’s have been cancelled really annoys me, as this is quite a critical phase. 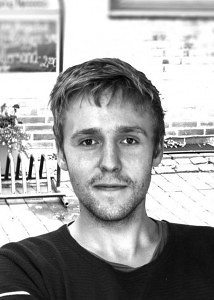